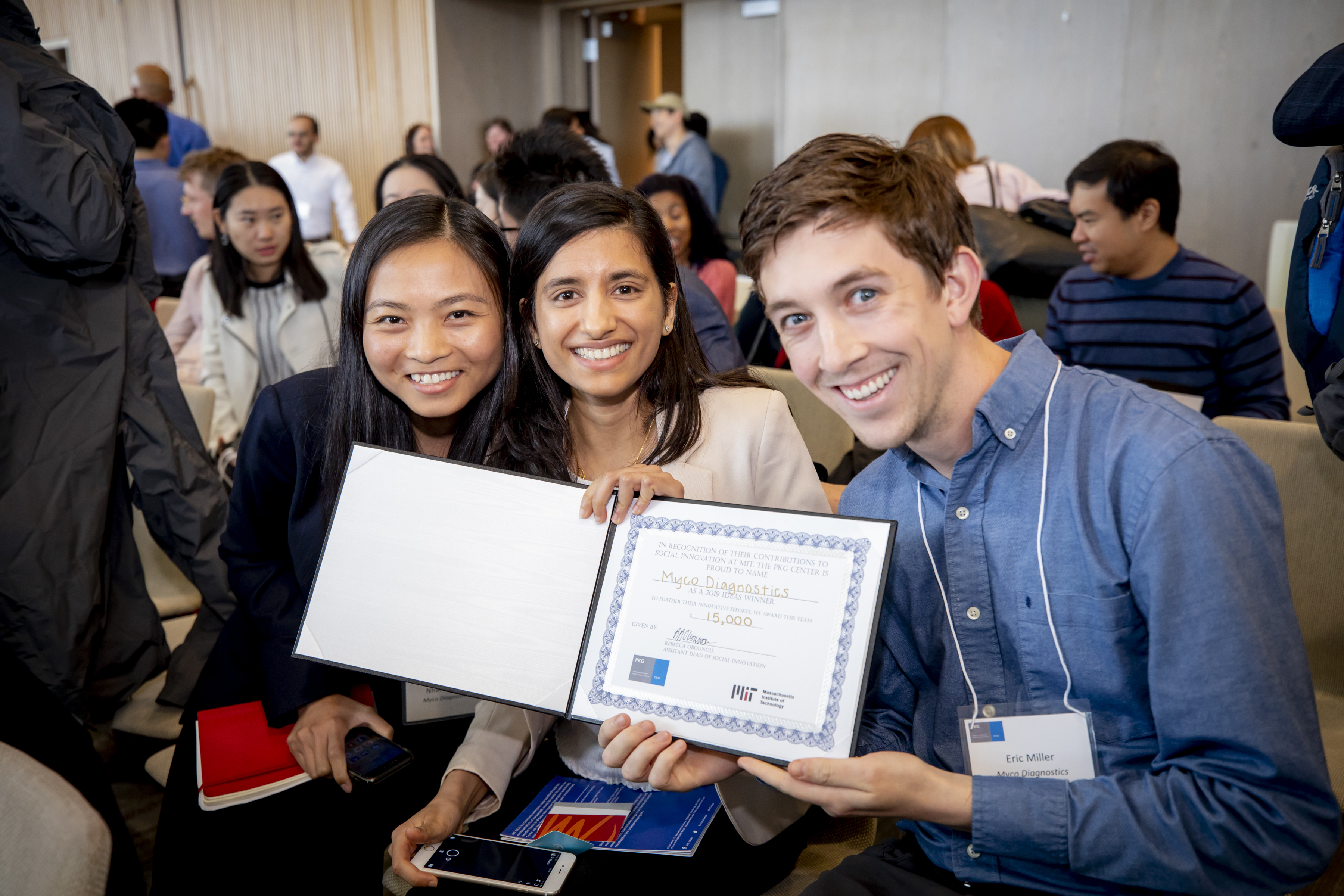 Myco Diagnostics won the grand prize of $15,000 for developing a urine-based test that cheaply and quickly diagnoses tuberculosis in low-resource areas of India.

This year’s IDEAS Challenge grand prize of $15,000 was awarded to Myco Diagnostics, Tata fellow Eric Miller’s startup that is working on a urine-based test to cheaply and quickly diagnose tuberculosis in low-resource areas of India.

Tuberculosis, or TB, is traditionally diagnosed through chest X-rays or skin test analysis that requires medical professionals to examine microscopic samples. But for impoverished people in developing countries dealing with common TB symptoms like coughing or a fever, it can be difficult to travel to the nearest clinic. The result is that only about 35% of the nearly three million people with TB in India get diagnosed. That makes it much more likely the disease will be transmitted to family members and people in the local community.

“If you’re living on $2 a day, you don’t necessarily have the financial freedom to travel to these clinics,” Myco Diagnostics co-founder Eric Miller, a Ph.D. candidate in the Department of Chemical Engineering, told MIT News. “We’re trying to replace that diagnostic with something that is decentralized, that can go to the patient.”

To accomplish that, Myco has re-engineered a set of proteins to bind with urine-based biomarkers of tuberculosis while staying stable enough to be stored at room temperature for long periods of time. It is also developing methods for cheaply grouping those proteins on paper so that, when exposed to urine, they can quickly show test results. “Studies have shown that if you could cut the time to diagnosis from six months down to three months, over the course of 10 years you could reduce the incidence of TB by 65 percent,” Miller says.

Myco’s team is made up of Miller; Naht Nguyen, an MBA candidate at Sloan School of Management; and Aditi Trehan, a research scientist at the Broad Institute of MIT and Harvard. Miller credits his Ph.D. advisor Hadley Sikes, the Esther and Harold E. Edgerton Career Development Professor at MIT, with helping to focus his research on areas that could make an impact. Myco has also been supported by the Tata Center, the Deshpande Center, the Singapore-MIT Alliance for Research and Technology, and the Sandbox Fund.

Ten impact-driven student teams tackling a wide range of problems around the world took home $100,000 in combined awards at the MIT IDEAS innovation and social entrepreneurship showcase and awards Saturday. A total of 34 teams, many members of which are already in the early stages of company building, displayed their projects at the event.

Each year, IDEAS serves as a launchpad for new ventures with sustainable impact. Last week’s showcase and awards were the culmination of a process that began at the beginning of the academic year when 68 teams entered the MIT IDEAS program. Teams received feedback and support from industry experts, past IDEAS winners, and more than a dozen centers and programs across campus throughout the program.

Each of the projects fell into one of nine categories: water and sanitation, education and training, agriculture and food, health and medical, emergency and disaster relief, housing and transportation, energy and environment, mobile device and communication, and finance and entrepreneurship.

About 200 people attended the event on the 7th floor of the Samberg Conference Center. Thirty-five judges spoke with teams deliberated on the floor below the event. They ultimately awarded 9 other teams prizes of $10,000 and $7,500 each. Those teams were: