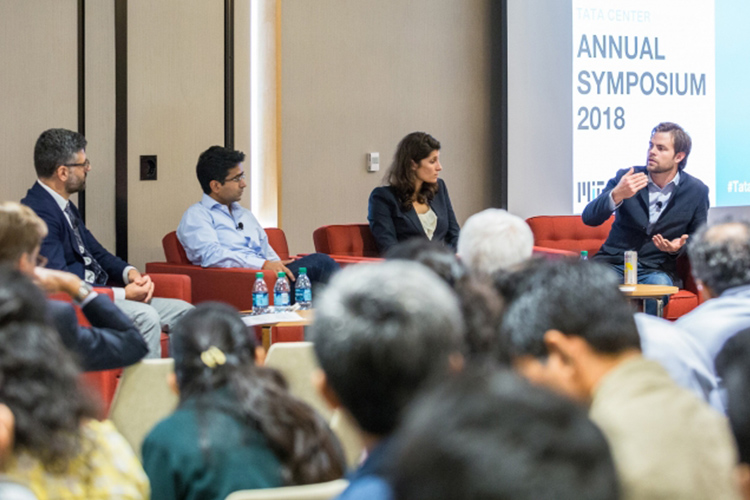 Fourth annual Tata Center Symposium highlights the need to invest in technologies for the developing world from a market-driven perspective. Shivangi Misra | Tata Center for Technology and Design October 17, 2018 The MIT Tata Center for Technology and Design has funded upwards of 100 projects since its inception and finds itself at a crucial juncture of identifying market opportunities for some of its advanced-stage projects that require further support in order to be turned into profitable social enterprises. The Tata Center was first established at MIT six years ago by a generous donation provided by one of India’s oldest philanthropic organizations, Tata Trusts. With several advanced-stage projects now in the pipeline, the center’s leadership recognized a need to answer a fundamental question: How can the Tata Center provide further support, and what might that support look like, to research projects that have reached a state of maturity? The center’s recently-concluded fourth annual symposium and workshop, a two-day event hosted at the Samberg Conference Center titled “Translating Research into Impact,” aimed to do just that. “This is a preoccupation for us. We’re no longer looking for things to do, we’ve found things to do. And we’ve brought technologies to a point at which they’re ready to go out into the world in the form of helpful products and services,” Tata Center Director Rob Stoner said as he welcomed students, industry partners, faculty, non-governmental organization representatives, and government officials from both India and the U.S. to the conference. “So, our focus has become translation — handing off technologies that may have reached the prototype or demonstration stage at MIT to entrepreneurial firms, government agencies, NGOs — anyone who has the vision and commitment to bring them to scale in India. It takes a focused effort to do that successfully.”

Stoner was joined at the conference by Manoj Kumar, head of entrepreneurship and innovations at Tata Trusts and Maurizio Vecchione, the executive vice president of Global Good and Research, which is a collaboration between Intellectual Ventures and the Gates Foundation. In his opening keynote address, The Power of Developing World Technology: Reverse Innovation, Vecchione stressed the importance of investing in technologies for the developing world from a market-driven perspective. Focusing on the health care sector, Vecchione emphasized the need to dramatically increase research and development budgets targeted toward finding solutions for diseases like HIV, malaria, and tuberculosis in the developing world. The world’s population, primarily led by developing countries like China, India, Nigeria, and Mexico, is projected to reach 9 billion by 2040. The keynote was followed by a panel on scaling social enterprises with Jessica Alderman, the director of communications for Envirofit International; Alex Eaton, CEO of Sistema Biobolsa and Charity; and Manoj Sinha, CEO of Husk Power Systems. One of the core issues that emerged during the panel was the perceived dichotomy of impact versus profit. “The idea of profit is important. And profit is absolutely tied to impact,” Alderman said. “You will have a short-lived company if you don’t have a solid way of getting to profit.” Symposium attendees were also introduced to new Tata Center startups and multiple advanced-stage projects working on technologies including urine-based tuberculosis diagnostics; • Affordable silicon-based nanofiltration; • Accessible intraperitoneal chemotherapy devices; • Intelligence deployment to improve agri-supply chains; and • Photovoltaic-powered village-scale desalination systems. The first day came to a close with a fireside chat with Ernest Moniz, the Cecil and Ida Green Professor of Physics and Engineering Systems Emeritus and former U.S. Secretary of Energy, followed by a town hall on funding social innovations with Ann Dewitt, COO of The Engine, Barry Johnson of the National Science Foundation, and Harkesh Kumar Mittal from India’s Department of Science and Technology. On the second day of the conference, Ann Mei Chang, the author of “Lean Impact” and former chief innovation officer at USAID, delivered an inspiring keynote address on the importance of thinking big, starting small, and pursuing impact relentlessly. This second day was dedicated to parallel sectorial workshops on Tata Center’s six focus areas: housing, health, agriculture, energy, environment, and water. Workshop participants included faculty from MIT, the Indian Institute of Technology in Mumbai, Tata Fellows, active Tata Center collaborators, industry representatives, and representatives of some of India’s most influential NGOs. “So many projects end up not leaving the institution because of gaps in our support ecosystem,” Stoner said, drawing the event to a close. “We’re determined at the Tata Center not to let that happen with our projects by filling those gaps.” The MIT Tata Center’s efforts to build connections in the developing world are linked to MIT’s broader campaign to engage with global challenges, and to translate innovative research into entrepreneurial impact. That work continues year-round. The next Tata Center Symposium will be held at MIT on Sept. 12 and 13, 2019. Article reposted from MIT News. Original can be found here.  If you were not able to attend the event, audio recordings of select addresses and panel discussions are available here.
Author Tata Center
Share this post