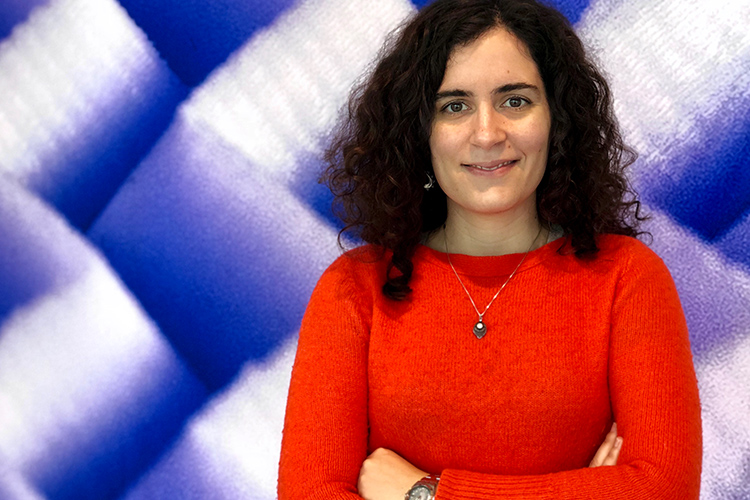 Ph.D. student Katerina Mantzavinou’s image will be on display for a year

Tata fellow Aikaterini Mantzavinou’s image depicting her work developing an origami-inspired chemotherapy drug delivery mechanism recently won an award at the Koch Institute Image Awards and will be on display at the Koch Institute Public Galleries for one year. Mantzavinou is developing a thin biomaterial sheet that can release low-dose chemotherapeutic drugs over several weeks inside a cancer patient’s abdomen. She drew inspiration from Japanese origami to fold the sheet down so that it can be placed in a patient’s abdomen by minimally invasive surgery.

Conventional forms of chemotherapy primarily rely on highly trained medical professionals at specialized cancer centers to administer the right dosage through catheters. Patients can get intraperitoneal chemotherapy directly into their abdomen through an implanted catheter, but the toxicity, complications, and resources associated with this treatment make it largely unattainable in the developing world. Intraperitoneal chemotherapy is given as a series of multi-liter infusions at the highest dose that a patient can tolerate every few weeks over the course of months. Patients in developing countries especially face limited access to specialized cancer centers and are forced to repeatedly travel to bigger cities every few weeks during their treatment.

Mantzavinou is working on a low-dose chemotherapy-releasing implant designed for minimally invasive surgical insertion to make intraperitoneal chemotherapy more accessible, cost-effective and safe for cancer patients around the world, including millions of patients in India and other developing countries. She has partnered with clinicians across India including at Tata Memorial Hospital in Mumbai and All India Institute of Medical Science in Delhi as well as regional cancer centers to help her guide the design and deployment of her implant to make it appropriate for India and other resource-constrained settings. Here’s how she describes her research – “We’re working as a bridge between the cutting-edge research done at places like MIT and those most in need of cost-effective and accessible technologies for cancer treatment.”