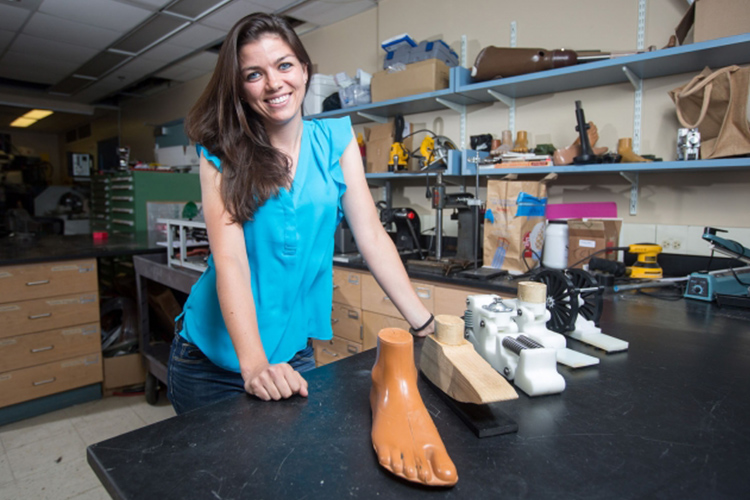 Tata Fellows are awarded in national competition for their technological innovations in the developing world.

The Lemelson-MIT Student Prize is a nationwide search for the most promising inventive undergraduate and graduate students. Candidates are assessed on the breadth and depth of inventiveness and creativity; the potential for societal benefit and economic commercial success; experience and ability to serve as a role model for youth.

Kathy Olesnavage won for “Cure it!” with her design process for a high-quality, mass-manufacturable prosthetic foot, and Natasha won for “Eat it!” with her invention to improve the efficiency and affordability of water desalination.

Katy Olesnavage has quite the history with MIT. She received her Bachelor’s and Master’s degrees in mechanical engineering in 2012 and 2014 from MIT, and she expects to receive her Ph.D. in the same subject in September 2017. Although Olesnavage was convinced that she would go elsewhere for graduate school, she decided to stay to work on a Tata Center project that focuses on creating a high-performance, mass-producible, and low-cost prosthetic foot with PI Amos Winter.

The world’s most widely used prosthetic is the Jaipur Foot, which costs roughly $10, lasts three to five years, and meets or exceeds the performance of competing products for developing countries. However, the 24,000 Jaipur Feet that are distributed every year are hand-made, an inefficient process that also creates quality-control problems. Katy’s research models a product that will most closely replicate the human gait. Her process looks to reproduce the behavior of a biological ankle and foot by determining the shape, size, and material of a prosthetic foot structure and then calculating how it will bend in response to a certain amount of weight.

Upon completion of her Ph.D., Olesnavage will join SpaceX as a part of the Crew Dragon program.

Natasha Wright has worked on designing, testing, and developing solar-powered water purification systems for Indian villages as a graduate research assistant in MIT’s Global Engineering and Research (GEAR) Lab since 2012. Her research is focused on improving drinking-water quality and better understanding of household water usage habits in rural India and other areas. Her solar-powered desalination system for off-grid water production in communities in India and Gaza reduces the required amount of energy and the amount of wasted water to filter brackish water.

Thousands of children die from the poor biological quality of water sources and the absence of effective water treatment in India despite the availability of biological water filters. She is working to provide affordable, safe drinking water. Wright was also part of a team that developed Smart Spout, a small, inexpensive, low energy consumption usage sensor that measures the long-term use of household water treatment and safe storage devices. The sensor allows for the collection of large, quantitative data sets, replacing less-reliable, self-reported survey data. Wright has applied for and received more than $1 million in grants and other funding for continued work in that area.

Wright led the MIT/Jain Irrigation team that won first place in the U.S. Agency for International Development (USAID) Desal Prize Competition in 2015, earning a spot on the Forbes 30 Under 30 in Energy list. She was part of a team that developed Smart Spout, an embedded sensor that measures how consistently people use their household water treatment and storage systems. The Smart Spout invention won the grand prize in MIT’s 2014 Global IDEAS Challenge, an annual innovation and social entrepreneurship competition that encourages students to tackle quality-of-life issues worldwide.

Portions of this article are taken from an MIT News report.