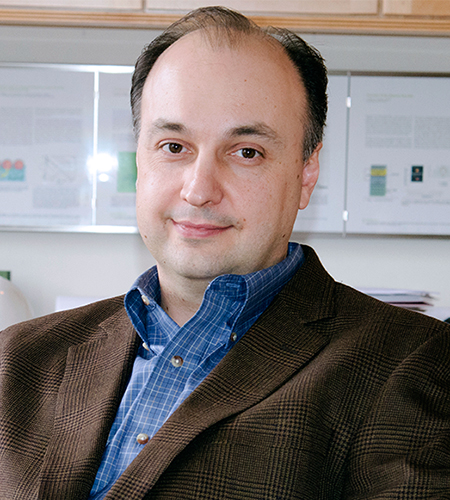 Vladimir Bulović oversees a broad portfolio of efforts within the School of Engineering that support innovation and entrepreneurship. He co-directs the MIT Innovation Initiative and is the faculty leading the design and construction of MIT’s new nano-fabrication, nano-characterization, and prototyping facility.

Vladimir holds the Fariborz Maseeh Chair in Emerging Technology and directs the Organic and Nanostructured Electronics laboratory, which he developed as a unique open nanotechnology facility. He is also co-directing the Eni-MIT Solar Frontiers Center, among MIT’s largest sponsored programs. Prior to joining the School of Engineering leadership Vladimir directed the MIT Microsystems Technology Laboratories, which during his tenure grew to support over 700 investigators and $80M of research programs from across the Institute. His research interests include studies of physical properties of organic and inorganic nanostructured films and structures and their applications in novel optoelectronic devices. His academic papers have been cited over 10,000 times, while his 60 U.S. patents and numerous patent disclosures have been licensed and utilized by both start-up and multinational companies. A practicing entrepreneur, Vladimir is a founder of QD Vision, Inc. of Lexington MA, which is manufacturing quantum dot optoelectronic components; Kateeva, Inc. of Menlo Park CA, which is focused on the development of printed organic electronics; and Ubiquitous Energy, Inc., which is developing nanostructured solar technologies. These start-ups presently employ over 200 researchers in the U.S. and a similar number of employees abroad.

Vladimir received his PhD from Princeton University, where his academic work and patents contributed to the launch of the Universal Display Corporation and the Global Photonics Energy Corporation. He is a recipient of the U.S. Presidential Early Career Award for Scientist and Engineers, the National Science Foundation Career Award, the Ruth and Joel Spira Award, Eta Kappa Nu Honor Society Award, and the Bose Award for Distinguished Teaching. Recognized as an authority in the field of applied nanotechnology, Vladimir was named to the Technology Review TR100 List, and in 2012 he shared the SEMI Award for North America in recognition of his contribution to commercialization of quantum dot technology. In 2008 he was named the Class of 1960 Faculty Fellow, honoring his contribution to energy education, which led to the launch of the MIT Energy Studies minor, the first academic program that spans all five schools at MIT. In 2009 he was awarded the Margaret MacVicar Faculty Fellowship, MIT’s highest teaching honor, and in 2011 he was named the Faculty Research Innovation Fellow for excellence in research and international recognition. Most recently, Vladimir was named a Fellow of the World Technology Network and the Xerox Distinguished Lecturer in recognition for his continued contribution to innovation of practical applied nanotechnologies.