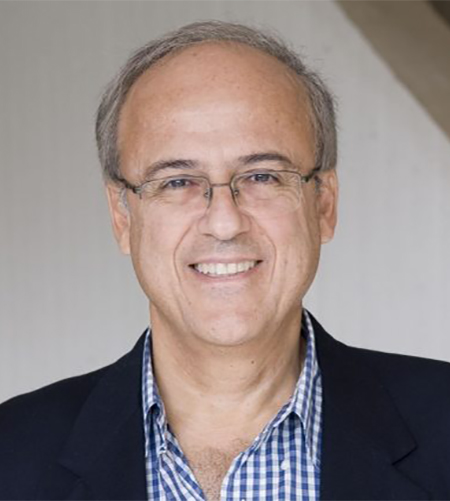 Greg Stephanopoulos is the W.H. Dow Professor of Chemical Engineering and Biotechnology at MIT, and Taplin Professor of HST (2001-) and Instructor of Bioengineering at Harvard Medical School (1997-). He received his degrees in Chemical Engineering, taught at Caltech between 1978-85, after which he was appointed Professor of ChE at MIT. His current research focuses on metabolic engineering, the engineering of microbes for the production of fuels and chemicals. He has co-authored or –edited 5 books, more than 360 papers and 50 patents and supervised more than 110 graduate and post-doctoral students. He is presently the editor-in-chief of Metabolic Engineering and Current Opinion in Biotechnology and serves on the Editorial Boards of 7 scientific journals and the Advisory Boards of 5 ChE departments. For his research and educational contributions, Prof. Stephanopoulos has been recognized with numerous awards, such as: Dreyfus award, Excellence in Teaching Award-Caltech, AIChE Technical Achievement Award, PYI from NSF, AIChE-FPBE Division Award, M.J. Johnson Award of ACS, Merck Award in Metabolic Engineering, the R.H. Wilhelm Award in Chemical Reaction Engineering of AIChE, Amgen Award in Biochemical Engineering. In 2002 he was elected to the AIChE Board of Directors, in 2003 to the National Academy of Engineering (NAE) and in 2005 he was awarded an honorary doctorate degree (doctor technices honoris causa) by the Technical University of Denmark. In 2007 he won the C. Thom Award from SIM and the Founders Award from AIChE and in 2010 the ACS E. V. Murphree Award in Industrial and Engineering Chemistry and the George Washington Carver Award of BIO. In 2011 he was selected as the Eni Prize winner for Renewable and non-Conventional Energy and was also elected as Corresponding Member of the Academy of Athens.

Professor Stephanopoulos has taught undergraduate and graduate courses of the core of Chemical Engineering and Biotechnology at Caltech and MIT and co-authored the first textbook on Metabolic Engineering. He is presently directing a research group of approximately 25 researchers who work on applications of metabolic engineering for the production of fuels and chemicals.